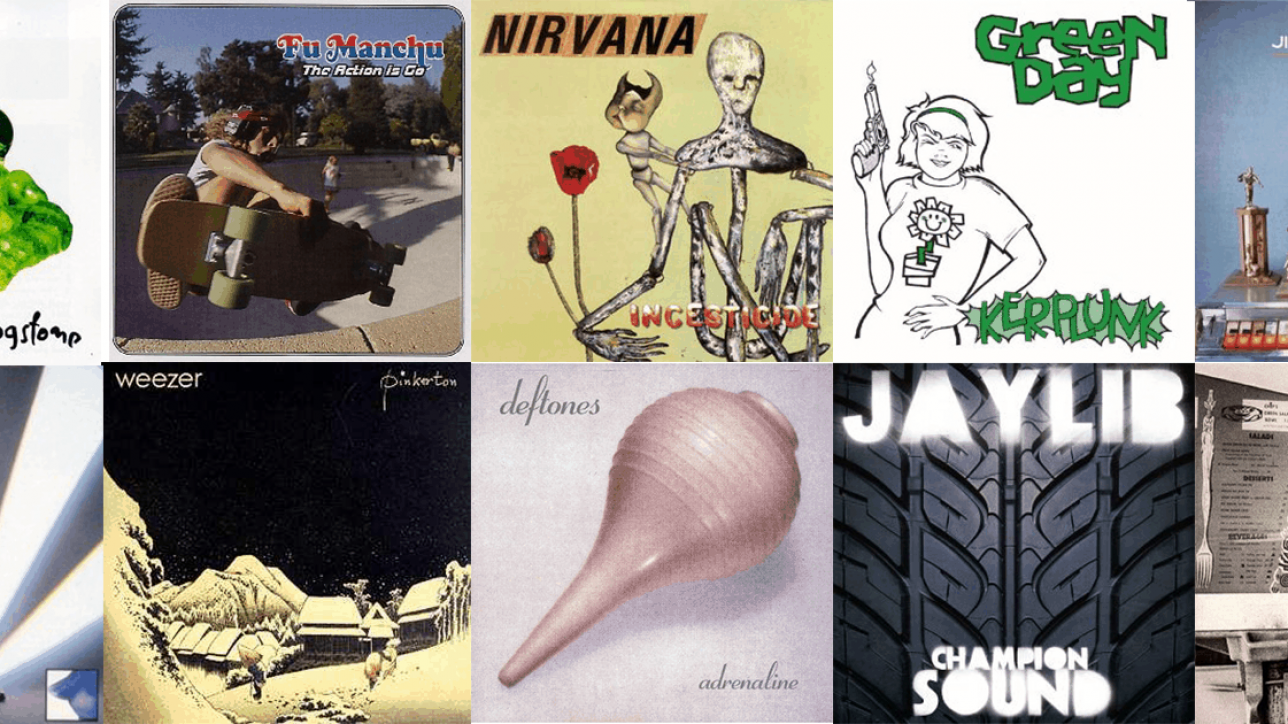 The Top 10 Influential Albums challenge has been doing the rounds on Facebook recently and now it’s my time to take up the gauntlet and try to create the definitive list.

At first I thought this would be easy. Having grown up in the 90s with a musical taste that saw me and my friends dismissing anything that wasn’t between the covers of Kerrang! Magazine as crap, there were going to strong contenders. But as I started to dig through my collection I realised it was going to be much harder than I thought.

On top of the songs that got me through GCSEs there were plenty of albums that soundtracked the final stages of my teenage life outside of the UK. Then there are the albums that made up my “enlightened” eclectic years at uni while working as a Head of Music in student radio.

What started as a simple game began a nostalgic trip down definitive musical moments in what made me me – as well as a long list of over 40 absolutely essential albums. To get it down to just 10 has been tough to say the least. Especially when at first, like all music snobs, I figured the list should make me look cool and influenced by bands you’ve never heard of.

However, that’s doesn’t mean it couldn’t be done. It would just take some time and a lot of soul searching.

And here it is, my top 10 albums that have influenced me. Some you might have heard of, some you might not, but all of them have helped make me what I am musically and no doubt as a person. It’s well deep.

They’re ordered chronologically rather than importance for a needless air of mystery and by no means because I couldn’t be bothered to rank them.

This was one of the first albums I bought on tape when I was 8. If I remember rightly it was from an Asda and I played it to death. At the time I, and luckily my parents, had no idea what “The chumps acting ill because they’re so full of “Eight Ball” Gunshots ranged out like a bell I grabbed my nine – All I heard were shells” meant.

The perfect accompaniment for sitting alone in your room with headphones on trying to interpret the lyrics.

Ok so not a real album as such, but a collection of b-sides and rare (at the time before MP3s and downloads) session tracks. Either way, it was a big album for me in two ways. One, it meant I no longer had a copy of To The Extreme and two, it woke my still pre-pubescent little mind up to a world of lyrics that didn’t mean anything but kind of did at the same time and the delicious fuzz of distorted power chords that has stuck with me for the rest of my life.

It may seem cliche these days to say Nirvana are a huge influence, but you weren’t there man (ok you might have been, but if you were you’d know it was something special too).

The perfect accompaniment for making a mix-tape for the girl you like full of not so subtle meaning.

This is a bit out of place chronologically as I didn’t find it till after I’d listened to Dookie about a million times. However, it definitely left a much bigger mark on my psyche than Green Day’s breakthrough third record.

Packed with songs about teenage love and growing up while being smothered with massive hooks and choruses, it was the perfect accompaniment for puberty. Throw in a brilliant cover of The Who’s My Generation and it’s a certified classic.

The perfect accompaniment to playing Metal Gear Solid on Playstation while eating cheap cupcakes from Kwiksave.

Another album I came late to the party on thanks to my obsession with all things metal in the mid 90s. It wasn’t till the beats of Hello Nasty infected my brain did I look at the Beastie Boys in much detail and soon found this on constant repeat in my Walkman.

It had samples, loops, beats and also some hardcore punk to peek all my interests in one 20 track mammoth.

The perfect accompaniment for talking about starting your own band while eating Pot Noodle with added Smash.

I was in awe of this album and Silverchair in general. Here was a band made up of 15 year olds (just that bit older than me) from Australia who had won a battle of the bands competition, got an album deal with Sony and then created this masterpiece.

It had songs that broke the verse-chorus-verse rock I was used to. They were putting three completely different parts in one. It had massive riffs and it had sensitive bits too. Looking back it was clear Daniel Johns had some serious 70s influences soaked in early 90s grunge. But at the time it blew my tiny little mind. Also, their bassist had a Korn sticker on his bass

The perfect accompaniment for school bus rides sharing one pair of in-ear headphones with your friend and missing out on the stereo mix.

The thinking man’s nu-metal band. I’m not going to lie. I, like my friends at the time, were massively in to Korn, Coal Chamber, Head Pe, Limp Bizkit and a load of other detuned Californian rap-metal. But there was something about Deftones and this first album especially that made it rise to the top of the pile.

It had the raw energy and emotion that appealed to me as a teenager, but also something more than just guitars and screaming. There were hints at more to come and it helped open up my ears to other genres of music. Deftones were my gateway drug.

Weezer’s first album was amazing, but it was Rivers Cuomo’s second attempt that had the most resonance with my younger self. Tortured tales of love lost or never found, crushing distortion and plenty of hooks to keep your sad foot taping.

Most people didn’t rate it when it came out. But as soon as I had this on CD I burned through plenty of batteries on my no name Discman rip-off playing it on repeat.

Unfortunately this album isn’t on Spotify, but hunt it down because it’s massive. It cemented my love of all things fuzz and just sounded exactly how I’d like the soundtrack to my skateboard video to sound.

The riffs or ridiculous and the hooks epic. Fu Manchu have had a lot of albums, all good, but none have stood up to this colossus.

The perfect accompaniment to moving away from home

This came out just before I started uni. I’d been a fan of Jimmy Eat World’s stuff while in Canada so was looking forward to its release. I had no idea they’d have crafted the perfect alternative rock album.

There is absolutely no filler on this album, just a rollercoaster of emotions, providing music for your good times, bad times and sad times. I managed to buy it before they retracted all copies due to 9/11 and needlessly changed the title track to Salt, Sweat, Sugar. After 13 years it’s still one of my go-to albums when I have no idea what to listen to.

Perfect accompaniment for hearing things that aren’t there.

I got this album as a sampler when working as head of music. Hip hop to me before then had mainly been the mainstream stuff, generic beats and rhymes, This album changed all that.

It was modern jazz, but good jazz with a beat and vocals that meant everything and nothing at once. Listening through headphones took it to another level when you could hear all kinds of crazy stuff going on in the mix. Even when I listen now I hear new things going on. Whatever your mindset when you listen, you’ll always find something to enjoy.

So there you go, 10 albums that made me who I am today.

If you’re lucky maybe sometime I’ll put up the other 30 albums that were in the long list. It’s got some proper classics in there that could easily have made this list on another day. They just didn’t this time.