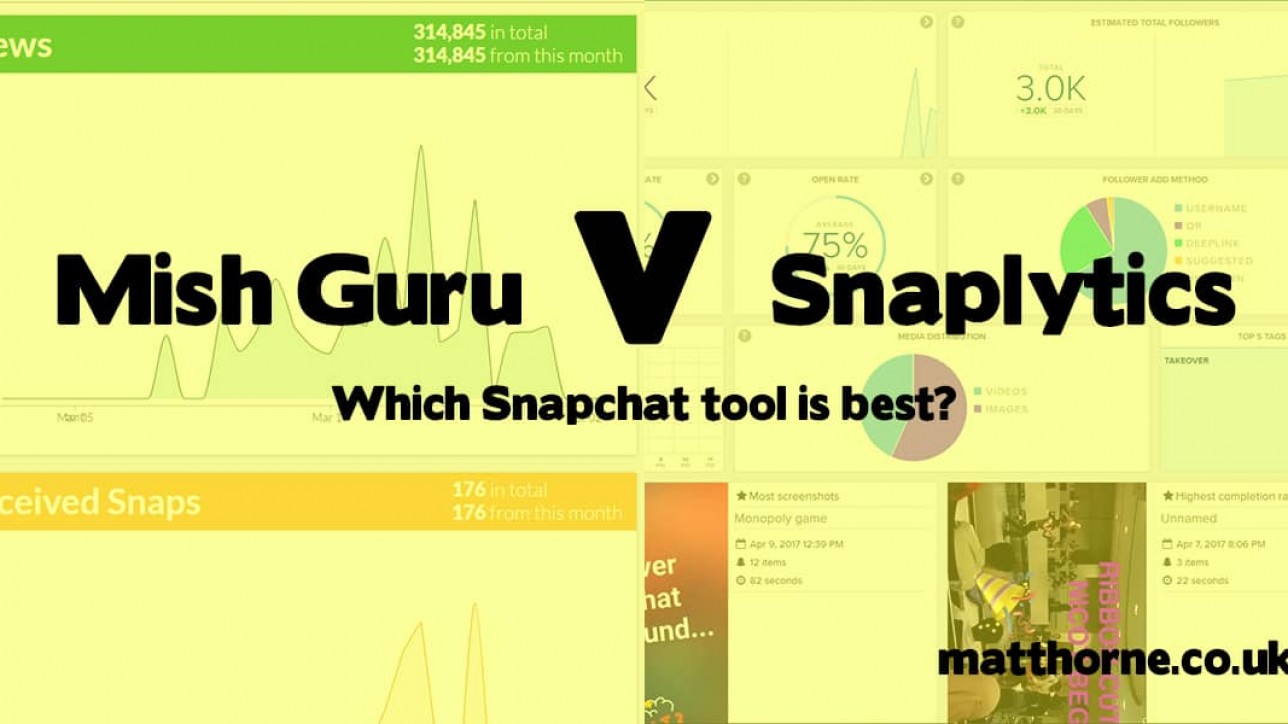 Regardless of Instagram’s attempts to steal all of their current and future users, Snapchat is still one of the buzz social media apps around (apart from in India). Especially if you’re looking to reach those super cool and trendy Generation Z and Millennials. The only problem for brands is, it’s an absolutely terrible app for doing brand type stuff.

You can’t schedule or easily upload content to your account that hasn’t been created in app. You can’t easily get detailed stats on how your content is performing or even how many followers you have. You basically can’t do a lot of the stuff most of the other major networks let you do (unless you’re a huge brand with access to Snapchat’s Discover platform).

So what’s a brand to do if they want to reap all the joys of Snapchat while maintaining the control and level of insight they’re accustomed to with social media? Let me introduce Mish Guru and Snaplytics – the third party solutions to your Snapchat woes. But which is best? Lets find out as I trialled both earlier this year.

Before I get in to things, it’s worth making one thing clear. Using both Mish Guru and Snaplytics violates Snapchat’s terms of service. By accessing Snapchat’s service through a third party you open yourself up to having your account shut down.

That said, a lot of big brands are using both. And from conversations with both teams, they reckon their developers talk with Snapchat’s developers – so the inference is they’re unofficially tolerated.

On the surface, both platforms seem to match up on features.

But as ever, when you dig deeper there are some huge differences, which I’ll get to in a minute. I want to talk about Snapchat chat and user engagement first.

One of the key types of story ran on brand Snapchat accounts is sharing snaps you’ve been sent. Mish Guru has a useful feature for this where it’ll save images and photos you’ve been sent so you can then repost them easily, and without the white border Snapchat usually puts on camera roll uploads. Looks great but there’s a catch.

If someone sends a snap that’s been edited or as part of a chat message Mish Guru won’t get them. This means you could miss out on a lot of user generated content depending on how your followers send you things. And Snaplytics just can’t get any incoming content.

It’s a huge draw back to each platform, but one they’ve told me they’re working on. The problem is, Snapchat doesn’t have an official API for their app, so it’s not an easy fix.

Both Mish Guru and Snaplytics have functions to upload pre-designed picture and video content to Snapchat which can really up your channel’s visual game.

They do have different upload specs though, which can have an effect on the end output depending on the device. Mish Guru also offer a Snapchat content template to help with your designing.

At the time of my test, Snaplytics scheduling system was in beta and it showed. It lagged, was buggy and there was a huge problem where content would either post with hours between each snap, or not even post at all (a problem logged in Feburary that was still happening at the end of March). They also only let you pick a scheduling time by the hour, like some kind of bad parcel delivery service.

Mish Guru on the other hand was pretty much perfect. You uploaded the content, added it to a story and then it went out the time you said it should, down to the minute.

That’s not to say Mish Guru was dream experience though. Their publishing system had a big let down. If you wanted to make an edit to a scheduled story you only had one option – delete and start again, even if you just wanted to change the time or date. Snapyltics story editing was a lot nicer including a drag and drop interface for rearranging snaps the way you want them.

As I mentioned before, Snapchat is terrible for the stats it gives you in the app. All you get is the number of unique views on each snap in a story and the number of times someone takes a screenshot of a snap. You don’t even get an accurate follower count.

Both Mish Guru and Snaplytics offer enhanced stats for your Snapchat efforts, but they vary wildly.

Mish Guru provides an accurate log of views on your story, screenshots and snaps received from your followers. They also estimate how many followers you have based on interactions with your content.

Snaplytics offers all this and a whole lot more.

They give you almost Facebook level of insight in to how your content is performing, your posting habits and even how your stats compare across your industry and Snapchat as a whole.

Snaplytics also groups your snaps in to stories so it’s easy to see an overview of story performance as well as a breakdown of each individual snap. With Mish Guru you have to do this leg work yourself, taking down stats for each snap in a story and then compiling the data in to a story overview.

With this level of detail on offer, Snaplytics is the clear winner if you’re looking for a solution that gives you the full picture on content performance, both alongside your content and your wider industry, and what your audience are in to.

Both platforms use Intercom as their online support tool. Both claim to have 24/7 support through this channel. In my experience, only Mish Guru really delivered on this promise.

Their team were friendly, helpful and online every time I needed help – regardless of time zones. Snaplytics on the other hand could take over an hour to get back (although they were probably busy trying to fix their publishing problems).

Mish Guru without a doubt. They’re even there to chat to if you’re bored or looking for inspiration.

It’s all well and good having these fancy new abilities to make the most of Snapchat. But what did they actually do for our performance? This is where things get interesting.

Here’s a comparison of key content performance indicators for Mish Guru ran content, Snaplytics ran content and content ran natively through the app. For these figures retention is a percentage of views on the last snap in a story to views on the first snap. Engagement is the sum of all screenshots and replies to a story as a percentage of initial views on a story.

On the surface it would appear that content shared through both systems under performed compared to native content ?

As with all stats though there’s a bigger story behind them, like the length of a story (the longer the story, the lower the retention), the call to action of a story on engagement (were replies/screenshots actively requested) and more. But on a top level, both Mish Guru and Snaplytics did little to improve content engagement.

After all that, which platform should you use to get the most out of your Snapchat efforts?

If you want in depth analysis of how your content performs with industry benchmarking, Snaplytics is the one for you. If you want an easy to use solid publishing platform, you’re better off with Mish Guru

If you want publishing and statistics, you’re going to need to spend top dollar and subscribe to both ¯\_(ツ)_/¯

I was trailing both these apps in March 2017. Since then Snaplytics have taken their publishing out of Beta and Mish Guru are beefing up their stats section with an aim to go live “soon”.