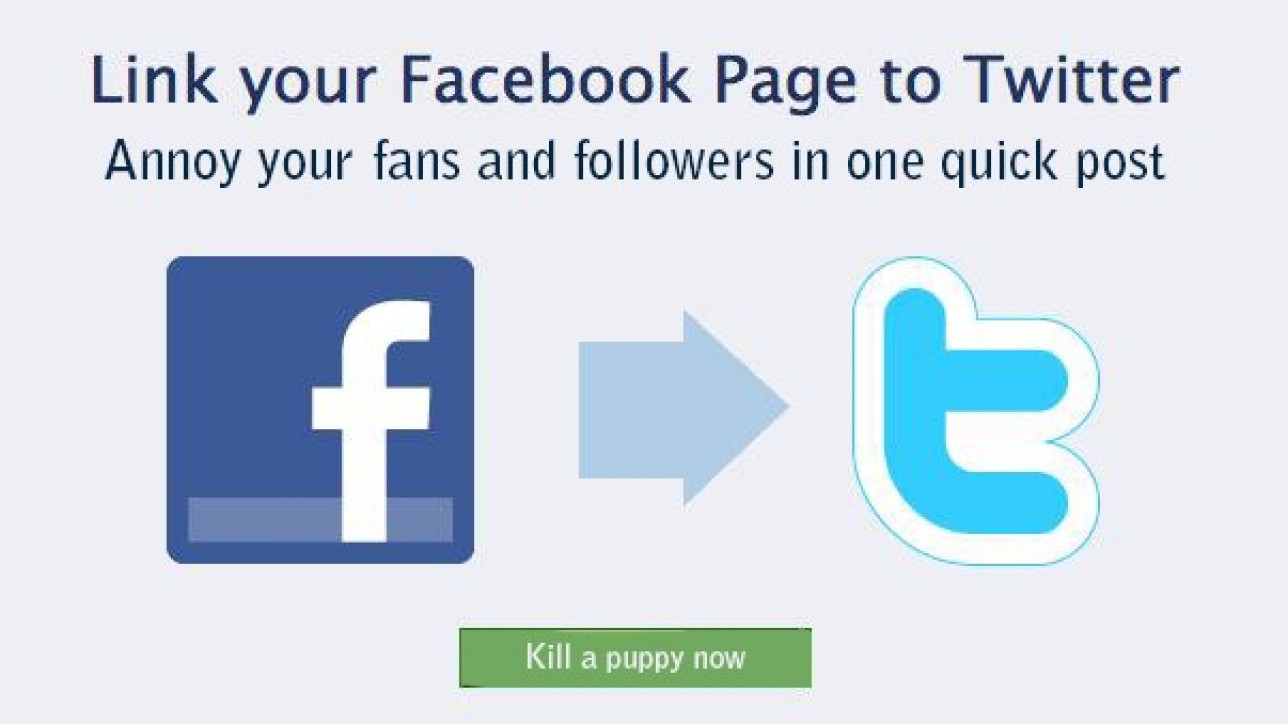 In the first of what will no doubt be many mind vents on social media wrongs, I’d like to quickly cover the heinous crime of linking your Twitter and Facebook accounts to share posts.

Now this may seem like a super quick way to spread your message across two of the most used social media networks, but rarely does quick mean the best (and yes I understand the irony of using that sentence in what is essentially a quick blog post).

“But why Matt? It saves me typing the same message out twice which means more time for looking at pictures of pugs pulling funny faces.”

An innocent question, so please allow me to list five reasons why you shouldn’t link your Twitter and Facebook accounts that will hopefully change your mind.

1 – You end up using the wrong language in the wrong place.

Twitter has its own language filled with hashtags and @ mentions which mean absolutely nothing on Facebook. On Twitter these are great, they help categorise your tweets and notify other people when you’re talking about them. When they’re automatically put on to Facebook they just look out of place and pointless, like a waiter in McDonalds.

2 – You can end up spamming Facbeook

Twitter is a transient social medium. It’s quick and of the moment which means you can post six tweets in close succession without anyone even blinking an eye. Lets face it, if your followers are following more than 300 people they probably wouldn’t even notice any way. But when those tweets are auto linked to Facebook, they’re going to clog up your followers/friends newsfeed and ticker and get you demoted by Facebook’s EdgeRank system quicker than an unfaithful general.

3 – You will lose out on tagging people properly

A couple of years ago Facebook took a leaf out of Twitter’s book and implemented tagging in posts. This meant it was easier to link through to other profiles and let people know you were talking about them Mean Girls style. If you’re posting on to Facebook through Twitter you lose this completely and any @ mentions just look naked.

Facebook has done a lot of work recently to make your newsfeed look beautiful which included increasing the prominence of pictures. With the soon to be rolled out new timeline, pictures are going to take up even more room. If you’re posting to Facbeook through Twitter, any images you include in your Tweet will just show up as a link which looks crap. Taking the time to post your image properly on Facebook will make sure they get the attention they deserve and you’ll get the engagement you’re after.

It just really bugs me, mainly because of point one but also because it shows you’re lazy and not dedicating the small amount of time it takes to properly take control of your social media presence. I’m not at the stage of defriending people that do it, but I’m sure as shit unfollowing any brands that do.

And there you have it, my top five reasons why you shouldn’t link your Facebook and Twitter accounts. It may save time, but it makes you look like the kind of person that kicks puppies, and you wouldn’t want that would you?